Franco Ongaro, ESA’s Director of Technical and Quality Management, paid a visit to an essential Agency laboratory in Valencia, Spain, tasked with helping to keep high-power radio systems operating in space for years on end. The High Power Radio Frequency (RF) Laboratory is one of a network of ESA labs located all across Europe, each one covering different aspects of the space environment, making their expertise available to Agency missions as well as the wider space industry.

Director Ongaro runs the Directorate that owns and operates the lab jointly with the Valencia Space Consortium (VSC) – a non-profit organisation set up by Valencia’s two universities, its regional government and municipality.

Each year satellites are required to have more power when it comes to communicating with Earth. Modern RF communications systems operate up at multi-kilowatt power levels, but this can have potentially destructive side effects in the vacuum of space. The resulting strong magnetic fields can accelerate free-floating electrons to erode adjacent materials, known as ‘multipactor’. Or small amounts of surrounding gases can be ionised into glowing ‘corona’, possibly causing localised heating or lightning-like electrical discharges. Powerful outcoming antenna signals may also cause ‘passive intermodulation’ interference with weaker antennas.

The Lab’s role is to better understand and help avoid these risky phenomena for forthcoming missions, as well as troubleshoot any problems that arise with missions already in space.

The High Power RF Lab was founded back in the 1980s, tackling problems that arose as ESA developed its pioneering ERS Earth-observing radar missions. It was originally based at ESA’s ESTEC technical centre in the Netherlands, but was moved to Valencia in 2010, in an effort to increase its employment by industry and researchers. The initial expectations have been exceeded for the facility’s use. In 2015 alone the Lab gave support to 18 major aerospace companies and supported ESA missions including Galileo, Biomass, SmallGeo, Meteosat and ExoMars.

The laboratory at UV

In June 2012 ESA and the VSC decided to open a second laboratory at the Engineering School of the Burjassot–Partnera Campus of the University of Valencia, devoted to the study of the effects of high-power RF systems on materials. The High-Power Space Materials Laboratory includes a pristine cleanroom for the examination of flight hardware and a suite of diagnostic tools. These materials are very important for space. The systems they are made from must stay operational under adverse conditions from 10 to 15 years – and cannot be repaired.

Both Labs are open to all aerospace companies as well as governments and research organisations. They operate on a non-profit basis, with revenues allocated to cover operating costs. 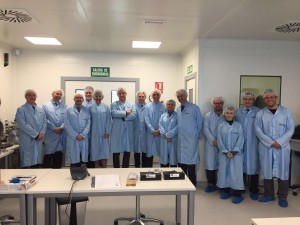 This site uses cookies and other technologies so that we can improve your experience on our sites: More info
Scroll to top